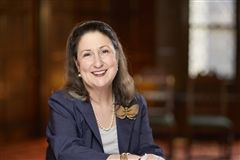 Head of School
216-455-3000
aKlotz@LaurelSchool.org
Ms. Klotz began her tenure as Laurel’s tenth Head of School in 2004. A graduate of Agnes Irwin School in Rosemont, PA, she was graduated from Yale College, where she earned her B.A. in English.
Ms. Klotz's M.A. is in the individual study of drama from the Gallatin Division of New York University and she is currently pursuing an MFA in Creative Non-fiction. She has worked in girls’ schools as a teacher and administrator for more than thirty-five years and is devoted to the academic, social and emotional development of girls.

At Laurel, Ms. Klotz often teaches English in the Upper School and drama in the Primary. Particularly interested in the public purpose of private school, Ms. Klotz is proud that both the North Star Collaborative and Laurel’s Center for Research on Girls, founded during her headship, used the School’s resources on behalf of girls at Laurel and beyond.

Deeply committed to anti-racist education and social justice, Ms. Klotz served during Summer, 2020 as a facilitator for nine listening circles for Heads of School about race in girls’ schools for the National Coalition of Girls Schools (NCGS).  She has served on a number of boards including the Independent Schools Association of the Central States (ISACS), NCGS, and Lawrence School. She was a founding member of the E-Prep board. She continues to serve on the board of the Headmistresses of the East and The Heads Network. Deeply committed to mentoring women to independent school leadership, she has served on the faculty for the NAIS Institute for Aspiring School Heads and currently directs the Heads’ Network Women in Leadership Seminar.

Ms. Klotz has blogged for the Huffington Post—frequently on topics around the intersection of motherhood and school leadership. Additionally, her work has appeared in Independent School Magazine, Community Works Institute Journal, and the NAIS Independent Ideas Blog. She is a founder and editor of Well-Schooled: the Site for Educator Story Telling. Her blog and list of publications can be found at www.AnnVKlotz.com.