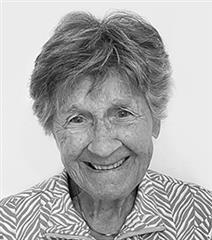 Ann Daniels Marks, Class of 1954, began playing tennis as a young girl at the Cleveland Skating Club, where she learned from the best players and coaches in Cleveland, including The Ohio State University’s men’s tennis coach who coached her in the summers.

At Laurel, she played a number of sports from tennis, to field hockey, to figure skating. At a time when most sports activity at Laurel involved Green vs White team competition, Ann was a catcher of the baseball team, played center on the varsity field hockey team, was a guard in basketball and was in the dance club. The 1954 yearbook noted that Ann Daniels “plays a fierce game of tennis and has a large collection of trophies to prove it.” At graduation she was honored with the All-Around Athlete award. In reflecting on her time at Laurel, she credits the school with having taught her to enjoy what you spend the most time doing and the value of being a well-rounded athlete.
After graduating from Colorado College, Ann taught tennis and played it professionally before ultimately moving into a 33-year career of coaching for the Upper Arlington girls tennis teams in Columbus. Over those three decades, she went from coaching Junior Varsity, to Varsity B, and finally the Varsity A tennis team and she saw her teams rewarded with several state team championships. She loved having an impact on young lives so much that she did not retire from coaching until the age of 82. Ann lives in Columbus where she has been a longtime volunteer for and supporter of many of the city’s nonprofits.
Back