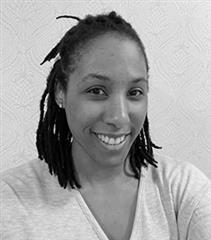 As a child Brittney Jackson, Class of 2010, enjoyed a variety of sports—softball, tennis, and horseback riding— but it was in Middle School that she discovered a love and talent for both track and volleyball that never waned. A three-season athlete in Upper School she played volleyball in the fall, basketball in the winter and ran track in the spring.

Success at states came in Ninth Grade when Brittney ran her way to gold as the fastest girl in Ohio, competing in Division 3 and clocking in at 12.4 seconds in the 100m dash with a 1.7 wind speed. While track and field is an individual sport, she credits staying connected to the other people on the team as vital in building mental confidence.
Brittney continued to run track the next three years and was recruited by Grand Valley State University in Michigan where she played volleyball her first year and ran track all four years and majored in Allied Health Sciences. Being an athlete at a Division 2 school meant she could compete at a high level and still have balance with school, sports and a social life. After college Brittney returned to Laurel for one season as the assistant track and field coach and interned with Athletes in Action, a nonprofit organization whose mission is to give athletes a greater sense of their purpose physically, mentally, and specifically spiritually. Today she lives here in Cleveland and works at Early Steps Learning Center.
Back